During the last ten years, the number and diversity of web portals dedicated to the collection of bird observations has increased rapidly and most of Europe is now covered by at least one of them. Some portals are based on very specific systems and cover a limited geographical area (e.g. a region or country) while others function across several countries using the same basic package. While there is substantial variation in the scope and volumes of data gathered by different portals, the advent of online data collection has produced a vast amount of data that would previously have been impossible to amass.

Unlike more traditional monitoring projects, which focus on structured data collection, these portals aim mainly to obtain year-round data from the relatively unstructured but intensive and widespread activities of birdwatchers. However, despite the fact that data are gathered following simple standardised protocols (e.g. complete lists), or in some cases even no protocol (casual observations), the vast amount of data contained in these portals and the sheer amplitude of their combined geographical and taxonomic coverage offer great potential for research on the temporal and spatial distribution of birds across large geographical areas. This is particularly the case where at least some basic information on recording effort is available. Such knowledge is urgently needed in order to increase understanding of bird distributions and movements and to address issues concerned with conservation and management (e.g. wind farms, avian borne diseases, flight safety).

In order to make best use of the data gathered by online portals across Europe, there is a need to establish and maintain a common database. Data sources are very scattered, and several portals have limited access or are available only in the native languages of their host countries. Given the diversity of initiatives and the well established nature of some of them, any attempt to favour only one of the systems or to create a new common one would be both undesirable and impractical. We therefore aim to create a common data repository that will hold data from each of the existing systems. This will contain the minimum aggregated information required to realise the full potential for large scale spatiotemporal analyses of such data and for other research and applied uses that are appropriately undertaken at a European scale.

This initiative will be the perfect companion to the work developed by the other two main projects undertaken by the EBCC: the Pan-European Common Bird Monitoring Scheme (PECBMS) and the new European Breeding Bird Atlas (EBBA2). PECBMS, a joint initiative with BirdLife International, monitors breeding population trends across Europe, using large-scale and long-term common breeding bird surveys and developing indicators of the general state of nature, while EBBA2 will produce a precise snapshot of the breeding distribution of all European bird species for the whole continent and for a specific time window (2013–2017). The EBP project will complement PECBMS and EBBA2 by focussing on the study of continental-wide seasonal changes in bird distribution as well as those temporal changes taking place too fast as to be properly tracked by more traditional monitoring projects. EPB will promote the use of simple, standardized bird recording protocols so as to improve the quality of the results that can be produced using these data.

The purpose of EBP is to establish a European data repository based on aggregated data from online bird recording portals from across Europe with the following major objectives:

2 To improve the value of online data gathering portals.

The EBP is a project of the EBCC developed through a partnership that currently comprises 81 institutions from 29 different countries.

Overall, the online data gathering portals run by the EBP partners collect c. 40 million bird records every year thanks to the collaboration of more than 100,000 active observers. This is the largest and most dynamic citizen science biodiversity data flow in Europe. 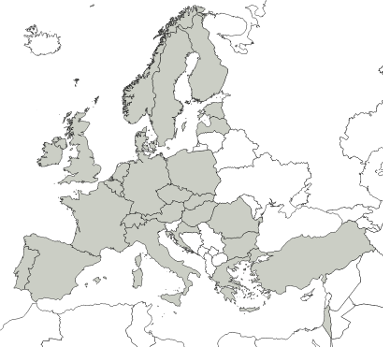 The EBCC is an association under Dutch Law of like-minded expert ornithologists co-operating in a range of ways to improve bird monitoring and atlas work and thereby inform and improve the management and conservation of bird populations in Europe.

The aims of EBCC are to: