EBP helps to understand movement patterns of rare species: the example of the Yellow-browed Warbler

The EuroBirdPortal (EBP) project will increase our understanding of large-scale migration patterns for a range of common birds frequently recorded by birdwatchers all over Europe. However, observation pressure is so high when all portals are combined that migration patterns of rare species can also be apprehended.

Early autumn is a very good period for some of the rare Siberian species, and nowadays the adrenaline level in fanatic birders is very high knowing that two strong anticyclones, as seen below, are currently driving eastern wind directly to NW Europe.


A high yield of Eastern vagrants or rare migrants was therefore expected and is actually already observed. Among them, the Yellow-browed Warbler (Phylloscopus inornatus), a tiny passerine breeding from Ural region to Eastern Asia and normally wintering in South-East Asia, is now in the limelight. Very high numbers of this beautiful species are currently recorded in many European countries, especially on the eastern coast of the UK.

The pattern of migration of this nice warbler can easily be seen through the EBP viewer: 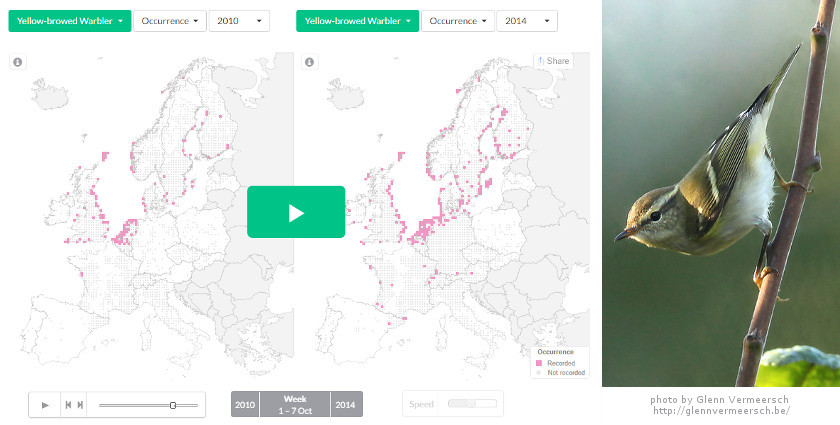 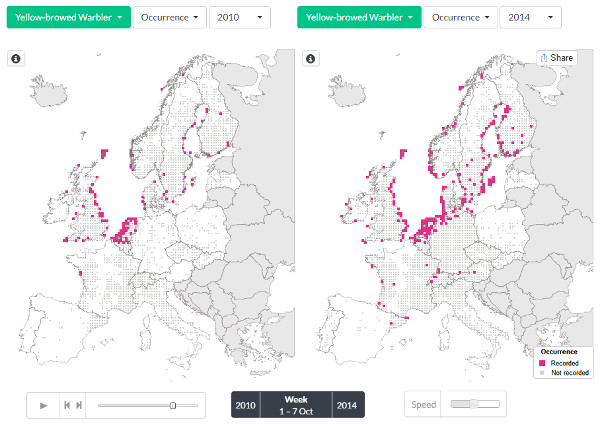 In the animated map we can clearly observe that the first records take place in Finland during the first week of September, then subsequent arrivals occur in Eastern UK and southern North Sea coastal areas. In some years, they appear first in the UK, but in other years they come more quickly in the Netherlands and Belgium, depending probably on local weather variation. The peak week is in general between 8 and 14 October.

When EBP will run on a near-to-real time basis, these impressive migration events as the one observed this year will be rapidly detected and easily followed by birdwatchers all over the continent. Even before that, keep an eye open and train your hearing, because 2016 is THE year to find this species at your local patch!