During the last two years most of the work done in the framework of the EBP has been focussed to fulfil the objectives established in the LIFE EBP preparatory project. In this context, the launch of a new version of the EBP viewer has been a key milestone. The main improvements and functionalities of this version of the viewer are described in detail in this article of Bird Census News.

There were two main reasons behind the decision of developing a new version of the viewer. On one hand, the partnership increased largely, particularly in 2017, thanks to the participation of the key ornithological institutions in Bulgaria, Croatia, Cyprus, Estonia, Greece, Hungary, Romania and Turkey and their respective online portals. This meant that the geographical area shown in the previous version of the viewer was far too limited to properly show the data collected by the new partners. Moreover, the increase in geographical coverage would require also doubling the capacity of the current cloud mapping and database repository that handles the processed data used to visualise the animated viewer maps.

On the other hand, it was required to adapt the old version of the EBP viewer to the much higher updating frequency expected to be put in place by the end of 2018, when a new data sharing standard, automated data flow and database repository will be fully functional. Up to know, the data has been uploaded to the viewer once a year and the whole data flow has been managed on a manual or semiautomatic basis (the partner’s datasets are not directly connected with the central EBP data repository). By the end of the year, thanks to these new technical developments the content of the EBP viewer will have to be updated at a weekly basis and showing data up to the previous week.

Finally, this new version is fully responsive and tablet and mobile friendly, allowing people to enjoy the EBP maps from a much bigger array of devices than previously. 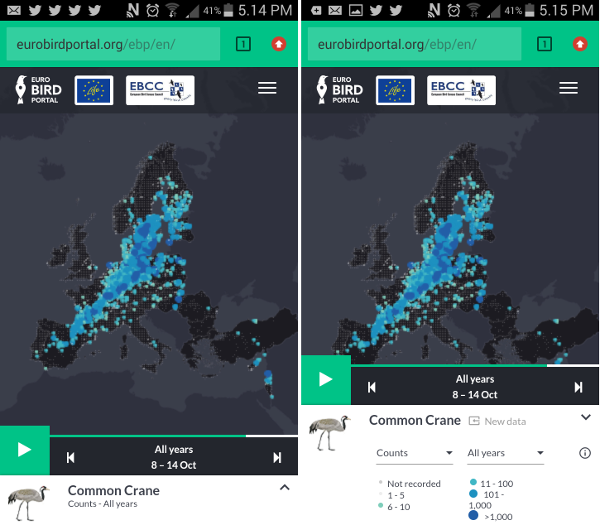